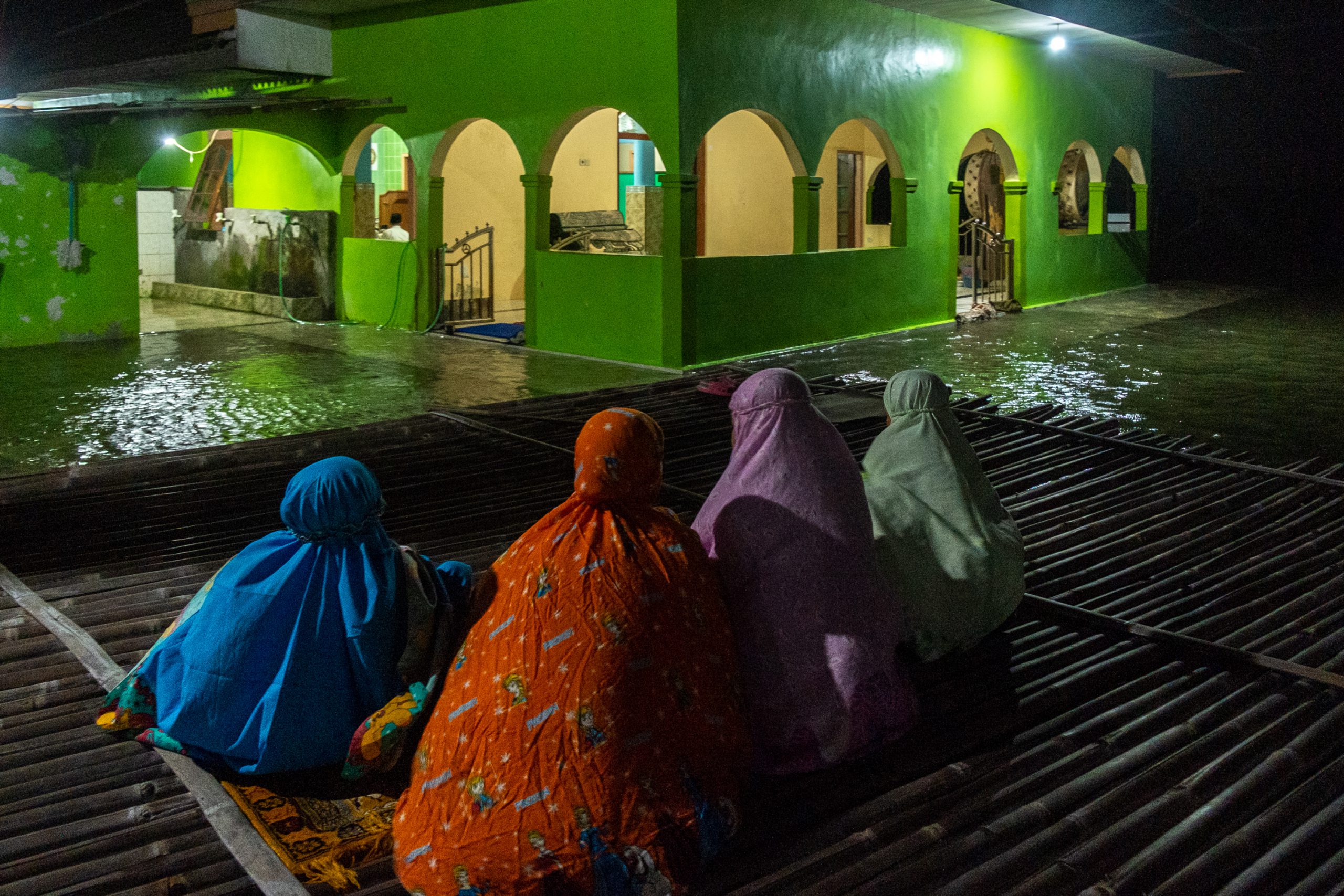 Sayung subdistrict, Demak, Central Java, Indonesia. In the evening children are seen praying on a bamboo construction during taraweeh of Ramadan. The bamboo extension was built outside the mosque as it is surrounded by the elevated sea level.

My name is Aji Styawan (b.1990), I’m a photojournalist and documentary photographer based in Demak Regency, Central Java, Indonesia. I started my career as a freelance photojournalist in 2013 by joining several photo press agencies. While working with different wire services, my work has been featured in local and international news outlets.

This project documents the resiliency of the people in Demak Regency, Indonesia, as they live with rising seas in their neighborhoods and inside their homes.

As the recipient I am beyond thrilled, this grant is so meaningful to me. As a native photographer in Demak, this grant will help me to continue producing this story over the long term, separate from my daily work as a photojournalist at Antara Foto press photo agency.

With this project that will be shown in the news, a more appropriate solution might come from the government, or from those organizations and people who care about the climate crisis, to help the people of Demak as they face rising sea levels on a daily basis in their homes, and on their land.

This grant will also open opportunities for me to continue my project in other parts of Indonesia, which are severely impacted by rising sea levels due to climate change, especially on Java. I will also focus and investigate the ways people are working on solutions.

Indonesia is one of the largest archipelago nations in the world with over 17.000 islands. With the majority of the small islands only one meter above sea level, coastal areas are being threatened by climate change. Deforestation, land reclamation and groundwater extraction by the industry on the coasts make these areas even more vulnerable to rising sea levels.

Experts predict that before 2050, thousands of small islands and millions of houses in coastal areas across Indonesia will disappear due to rising sea levels. Data from the Indonesian Ministry of Marine Affairs and Fisheries, show the abrasion rate in Indonesia reaches 1,950 hectares per year. Total land lost between 2000 and 2014 was 29,261 hectares. Abrasion on the northern coast of Central Java reached 6,000 hectares since 2000.

Demak Regency is located on the northern coast of Central Java, about 450 km east of Jakarta. Some areas of Demak, Sayung subdistrict, were ranked the highest impacted by abrasion. The coastline had retreated around 5.1 kilometers from the coastline compared to 1994. Over 500 households were displaced due to abrasion in the the past 20 years and more are following. The ocean engulfs more than thousands of hectares land areas in some of villages where one of hamlets has now completely sunk below sea level.

The villagers witnessed the disappearance of their land, that was once productive land used for agriculture. With the sea rising that land gradually morphed into becoming fish ponds and mangrove forests which are now also submerged. Today it’s all sea, and former farmers are now fishermen. Households are cut off from the land, as bridges and roads sink below sea level forcing the villagers to adapt and survive in the different ways. When alive, the residents live with the seawater, they are surrounded by it, even inside their homes.

When they die they are buried in the land submerged by the rising sea.

I am a native to Demak, I live and work as a photojournalist from there. The people in Demak are my neighbors and their situation appeals to my heart. Being a local photographer, I feel a strong commitment to make their story known, to show people around the world how climate change already impacts people’s lives. If the world does not act it will only get worse, to at least slow down what already is a climate crisis.